Comedy film ‘Total Dhamal Movie’ is about to be released soon in cinemas. From the release, the whole starcast film is fiercely promoting B. Recently in the lead cast of Total Dhamal Movie, Ajay Devgan, Madhuri Dixit, Anil Kapoor and Riteish Deshmukh, along with director Inder Kumar, reached Delhi.

During this time the artists shared their experiences of working in the film and talked about their roles. Explain that ‘Total Dhamal Movie‘ is an adventure comedy movie and the third installment of ‘Dhhamal’ series. The film will be released on February 22. 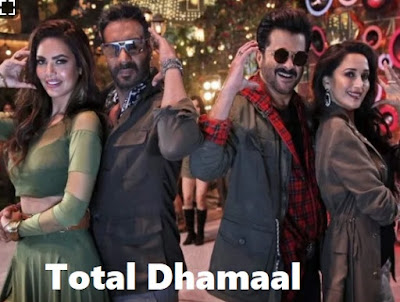 Regarding his experience working in the film, Ajay Devgn said, “We are playing the role of mad people all over the film. During the shooting, I enjoyed it and during the shooting of many scenes, I could not stop myself from laughing. ‘ They said, ‘It is very difficult to laugh people. You can not laugh twice on a joke But, our team has worked hard on the script of the film to entertain the audience. I hope the audience will appreciate it. ‘
At the same time, Madhuri Dixit said, “I am playing the role of a Marathi girl in the film, who has married a Gujarati boy (Anil Kapoor) and is running behind the money in both the films. Apart from director Indra Kumar, I had a great experience working with all our co-stars again.