Taylor scored 69 runs from 81 balls and he became the highest run-scorer batsman in New Zealand’s ODI side.

With the help of six wickets from Tim Southee and Ross Taylor’s record fifty, New Zealand defeated Bangladesh by 88 runs in the third and final one-day international on Wednesday, after a clean sweep of 3-0 in the series.
Bangladesh had the target of 331 runs before, but despite Shabbir Rahman (102) first century in his career, his team was dismissed for 242 in 47.2 overs. In the last six ODIs of New Zealand, Saeedi, who was out of the team, took six for 65 runs while Trent Bolt took two wickets for 37 runs. 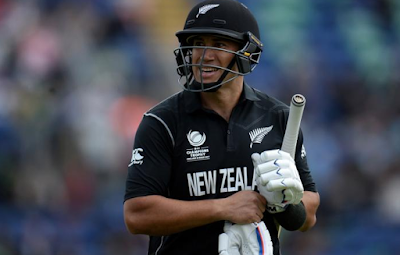 Earlier, Taylor scored 69 runs from 81 balls and he became the highest run-scorer batsman in New Zealand’s ODI side. Apart from Taylor, Henry Nicholls (64) and Tom Latham (59) also made half-centuries. James Neesham (37 off 24 balls) and Colin de Grandhom (37 not out off 15 balls) made a stormy batting in the final moments and scored a team score of 330 for six.
Mustafizur Rahman is the most successful bowler from Bangladesh side. He took two wickets but for this he scored 93 runs in ten overs.
Taylor made 47th half-century of his ODI career and in the meantime has scored his runs in 8026. He left Stephen Fleming (8007) behind This 34-year-old batsman has scored at an average of 48.34 in 203 innings.
In the first two overs, in the first two overs, Bangladesh took three wickets and shocked Bangladesh’s top order. At one stage his score was two runs on three wickets. Mushfiqur Rahim (17) and Mahmudullah (16) both were dismissed for 61, while Bangladesh’s half teamed up in the pavilion.
In such a case, Rahman Saifuddin (44) made 101 for the sixth wicket and Mehdi Hassan Miraj (37) with two partnerships of 57 for the eighth wicket but the difference was reduced only. Rahman played 110 balls in his innings and hit ten fours and two sixes.