Schedule of the IPL 2019 season 12 has been released. This is for the first two weeks and 17 matches. The second part will be released later.

Indian Premier League 2019 i.e. schedule of IPL 2019 season 12 has been released It has been released for the first two weeks. That is, the second part of the schedule will be released later. A total of 17 matches will be played in the first division. Tell yourself that the schedule for this year’s release late because IPL 2019 which should have been played in, having the general elections at the same time. So, the first two-week IPL 2019 schedule has been released for the first round. This year’s first match will be held on March 23. Dhoni’s Chennai Super Kings (CSK) andVirat Kohli will be among the Royal Challengers Bangalore (RCB). According to the statement released by the IPL Committee on Tuesday, the BCCI has issued a two-week schedule. Given the local administration and dates of election, schedule of the remaining will be released. 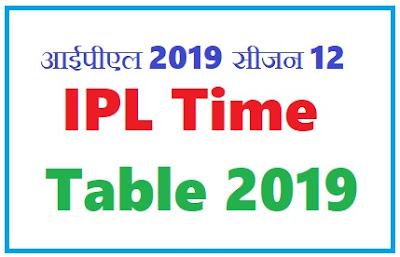