In case you missed it, the trailer The American film by Namrata Singh Gujral is set in the United States of America and India, featuring Nargis Fakhri and Rajkummar Rao as the lead pair. Bo Derek and Candy Clark also star in the prominent role. Based on the theme of Indian weddings, the films explore the journey of an American journalist (played by Fakhri), who travels to India for a magazine feature about the multiple ceremonies of an Indian wedding The movie premiered at the Cannes Film Festival this year and is slated soon. Joining the innumerable Indian wedding films and here’s what makes 5 Weddings unique. 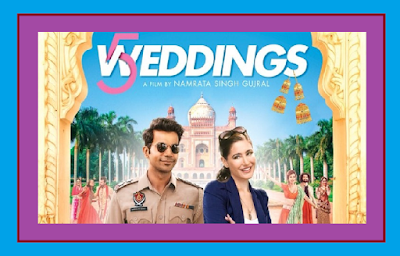 It has been spoken from a foreign perspective

Nargis Fakhri’s character is an Indian-origin American. Naturally, she’s aware of Indian wedding traditions but not for the insanity that comes with it. Her explorations on weddings and the many ceremonies are shown in a way that will appeal to the American audience while teaching them more about Indian customs.
It is not just a wedding but weddings in general.
Unlike most wedding films and this movie are not focus on one big Indian wedding. Rather, it’s a journey through multiple weddings & the ceremonies that are a part of the whole affair. The narrative have been a commentary on Indian weddings in general and how they are embedded in various customs and traditions. There is a lot more to learn about weddings in India here.
There is a love story – without the same old trope
If there is a wedding Here, Nargis’ character meets the dashing cop played by Rajkummar, whose job is to escort her travels in India He also keeps tabs on his work to ensure there is no journalistic espionage behind the magazine article. Romance blooms and the rest
Nargis Fakhri and Rajkummar Rao romance for the first time
Nargis and Rajkumar is the latest new Jodi! While this is the second time Nargis will be seen in an English-language film (She had a part of the 2015 action-comedy flick titled Spy), this is Rajkummar’s first off-shore venture. After making a mark on Bollywood with great performances, this is the internationally.
It explores the ‘hijra’ community of India
The hijra community makes a prominent appearance in Indian wedding ceremonies due to an age-old custom. In Nargis’ character’s journey about Indian wedding culture, she delves even more in the hijra community of India and the role they play in society. This is a lesson on awareness, not only for the American audience but also gives us an insight into the life of hijras too.
So are you ready for yet another crazy Indian wedding? Stay tuned for updates on 5 of the weddings.
Categories: Entertainment